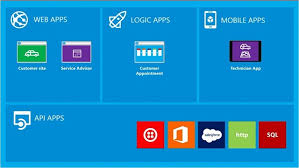 Microsoft released the preview of Azure Logic Apps in March 2015. Comparing to Biztalk, Azure Logic Apps is a paradigm shift. GA (general availability) is expected in January next year. It can be used in many ways such as:

Logic Apps has a few limitations as compared to BizTalk.

For instance, Logic Apps has an EDI accelerator but does not contain an HL7 accelerator. However, there are plenty of connectors already available; a list of core and enterprise integration connectors can be accessed here. Azure Web API Apps can be used for custom development when a connector is not available in the Azure marketplace.

Comparing to Biztalk, it is a paradigm shift. e.g. we can have queues/pub-sub per message type. BAM (Business activity monitoring) has been replaced with Application Insight. No HA setup required as its geo-redundant OOTB.

It also looks exciting especially when you get bored looking at the same old orchestrations and maps in Biztalk. Plus, the learning curve (some call it a learning wall and not a curve 🙂 for BizTalk Server is very high.

Here are the two videos to get an overview of Azure Logic Apps.