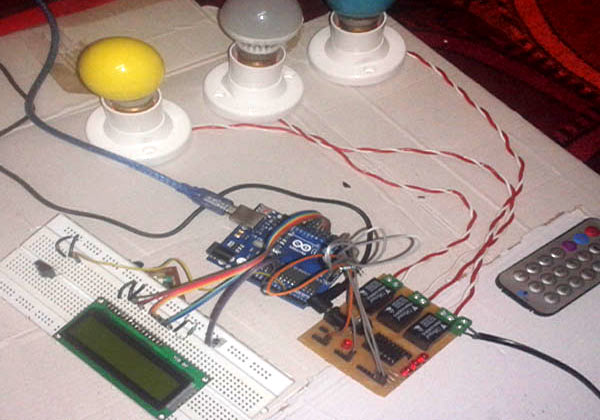 Designed in 2001 for AXA design Australia, the project connected Infrared transmission and reception capabilities to an existing home automation network. The user would place an IR remote, say of a TV in front of the device and trigger it to memorize a certain button (say volume +). The device would store a series of these in memory and transmit these to the TV on a command (say to mute the audio in the home entertainment system when a doorbell rings)

The solution consisted of an IR De-modulator that removed IR noise (anything not modulated at 40KHz or so) and passed on a clean, un-modulated signal to an ATMEL 89S51 microcontroller. The controller monitored the de-modulators output and stored the wwaveformin memory. Product vendors vary greatly in the wwaveformused in remotes. Two major classes are Sony (where the ssavedwaveform repeats continuously as long as the button remains depressed) and Hitachi (where one wave is sent on button press and another is sent repeatedly as long as the button remains pressed. The microcontroller connects to a Windows application that was used to configure the device. The controller and the device communicate with a serial link.

The controller also contained drivers for a custom home automation network (HAN) protocol. When the controller received a signal on the HAN network. It would generate a modulated waveform through the controller output pins (which were in turn connected to an IR transmitter).

The solution provided the ability to retrofit and control any device that uses IR remotes (e.g. Air conditioners, TVs, entertainment systems, etc.) from a centralized smart home automation system. The first version of the system was developed in 2001 and releases have been in production throughout Australia since.

Explanation of the solution directory

Royal Carribian Cruise and the internet of their things.