By Usman Shaheen 3 years ago

The best example where you can use Azure Event Grid is to automatically get notified when any user makes a slight modification to the production subscription, or when you have multiple IoT devices pumping telemetry data.

If you have an array of data (example, #Serverless on Twitter), you can easily convert the information into a CSV document or HTML table by using the “Create CSV Table” action. Later, you can pick up this CSV table and easily embed to an email. 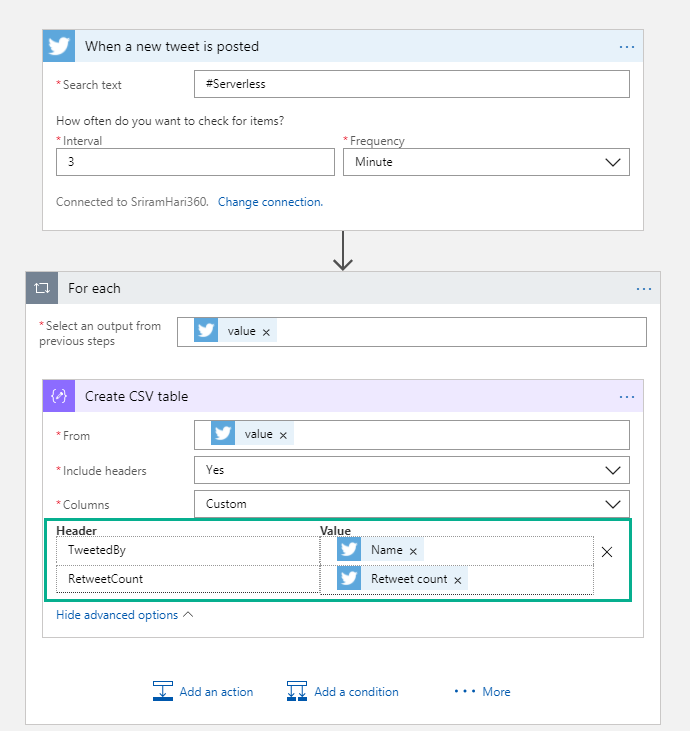 Link to more details on how you can integrate Azure Logic Apps and Log Analytics is given below. 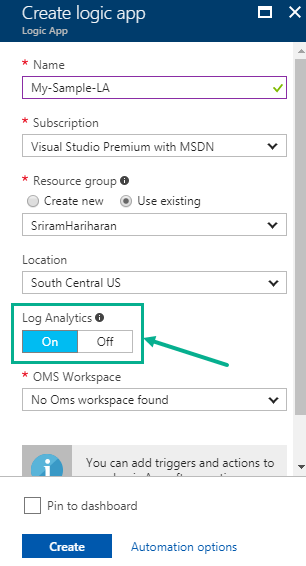 Create a global dashboard for all the available Logic Apps under your subscription. View the status of the Logic App, number of runs and additional details.

Link to more details on how you can integrate Azure Logic Apps and Log Analytics is given below. 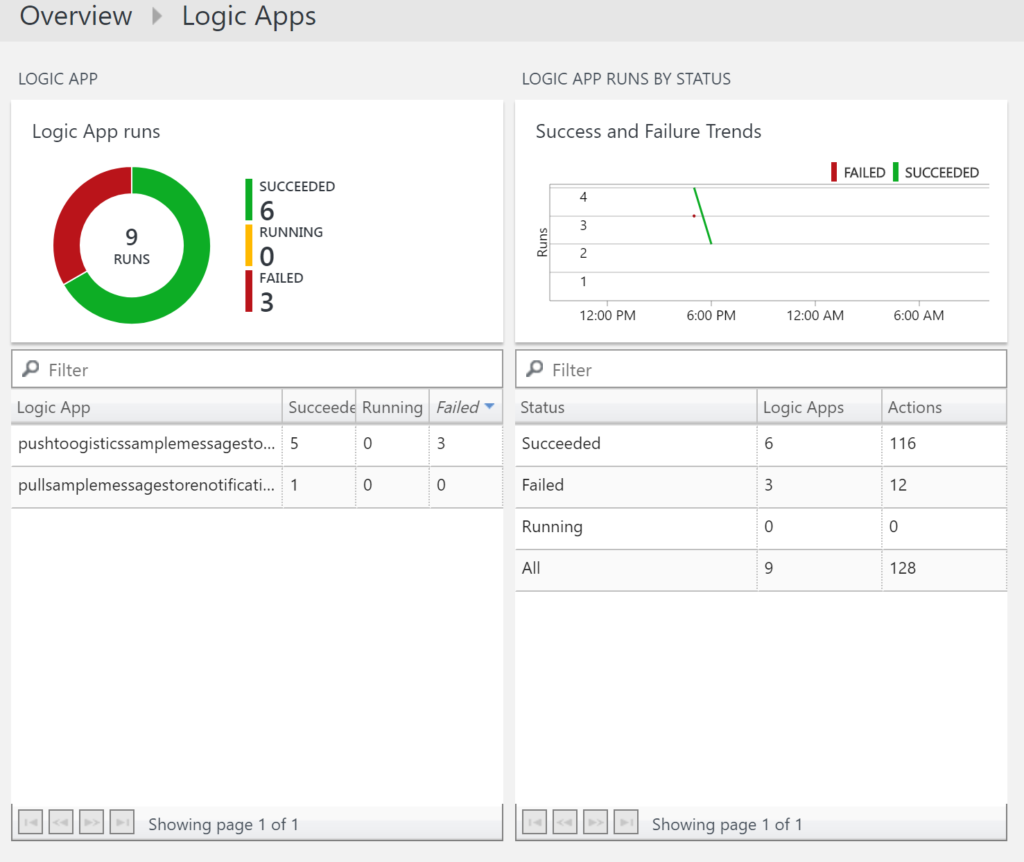 Say, you are working with Logic Apps and you add a connector. From now, you can easily switch between the code view and designer view by clicking “Peek code” from the Options drop down.

Note: At present, the Peek code is available only in Read-Only mode. If you wish you need to edit the code directly from here, you can send the Logic Apps team a feedback on Twitter or through User Voice. 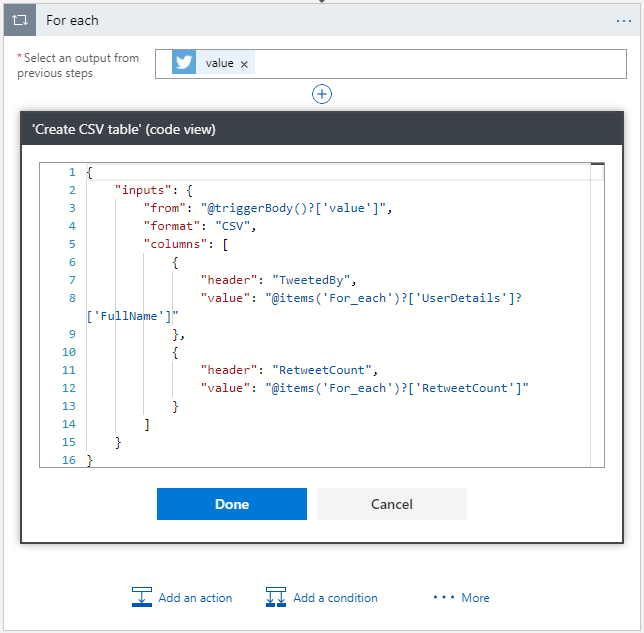 There are new options to schedule the Logic App execution on a Daily and Weekly basis. This was available in the code view but now you can get this experience right in the designer. Monthly update will be rolled out soon! 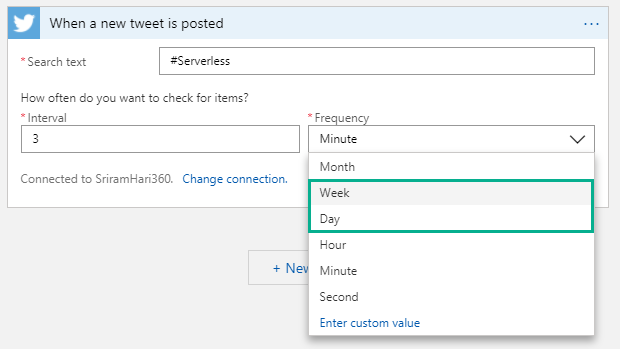 In the Schedule trigger, you will notice that when you click on Week, there are few advanced operations available for you to define when you want the trigger to execute during a week. Say, you want your trigger to execute every Monday, Wednesday, Friday at 9:35 AM, 1:35 PM; 5:35 PM. The below screenshot depicts the example. The preview section will display the actual Logic App trigger condition based on the previous selections. 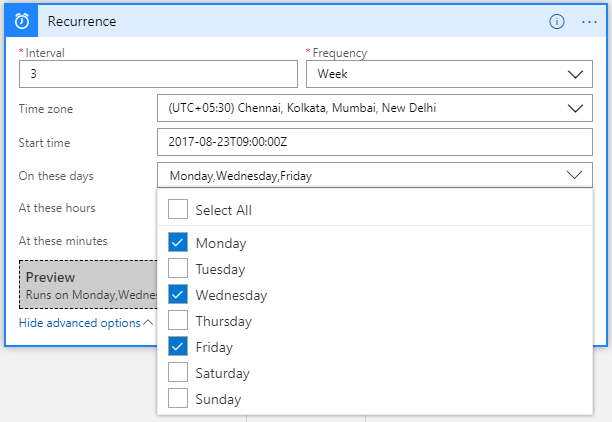 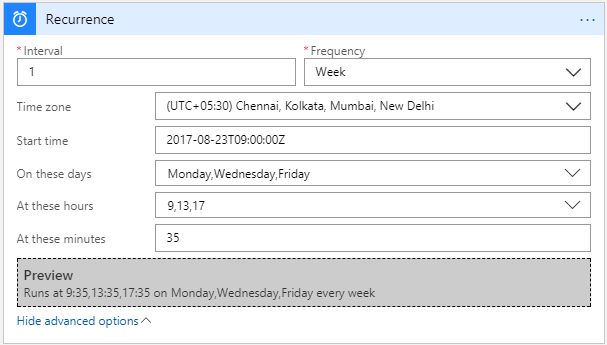 As usual, another long list of features that the Logic Apps team is currently working on and should be available in the coming weeks.

NOTE: This works with the Polling Trigger (and not with Request Triggers such as Twitter connector etc) without SplitOn enabled.

Get your own connector within your subscription so that your connector gets shown up on the list. This is currently in Private preview and should be available for public in the month of September.

Ability to move large files up to 1 GB (between) for specific connectors (blob, FTP). This is almost ready for release!

Native SOAP support to consume cloud and on-premise SOAP services. This is one of the most requested features on UserVoice.

Append capability to aggregate data within loops. The AppendToArray will be shipped soon, and AppendToString will come in the next few weeks.

This functionality will go live on August 25th. Say, if you are typing an expression, you will see the same intelligent view that you see when you are typing in Visual studio.

You can actually get to see the intermediate values for complex expressions.

This capability will soon be incorporated into the designer in the coming few weeks.

If there are 1000 iterations in the foreach loop and 10 of them failed; instead of having to look for which one actually failed, you can navigate to the next failed action inside a for each loop easily to see what happened.

You can automatically render the Azure functions annotated with Swagger. This functionality will be going live by end of August.

Many users who uses Power Apps and they want to talk to Logic Apps. This will make it a lot easier to call a logic App. You have to do some strange mechanicians before to light up that scenario.

One of those hidden features everyone should know about is that you can create batches in a Logic App. Adding new functionality, once the batch is full it will be flushed automatically according to the time you specify.

For example, flush the batch after every 10 minutes

Community Events Logic Apps team are a part of

President at Microsoft will be delivering the keynote speech.

If you are working on Logic Apps and have something interesting, feel free to share them with the Azure Logic Apps team via email or you can tweet to them at @logicappsio. You can also vote for features that you feel are important and that you’d like to see in logic apps at the given link.

The Logic Apps team are currently running a survey to know how the product/features are useful for you as a user. The team would like to understand your experiences with the product. Link is given below

If you ever wanted to get in touch with the Azure Logic Apps team, here’s how you do it! 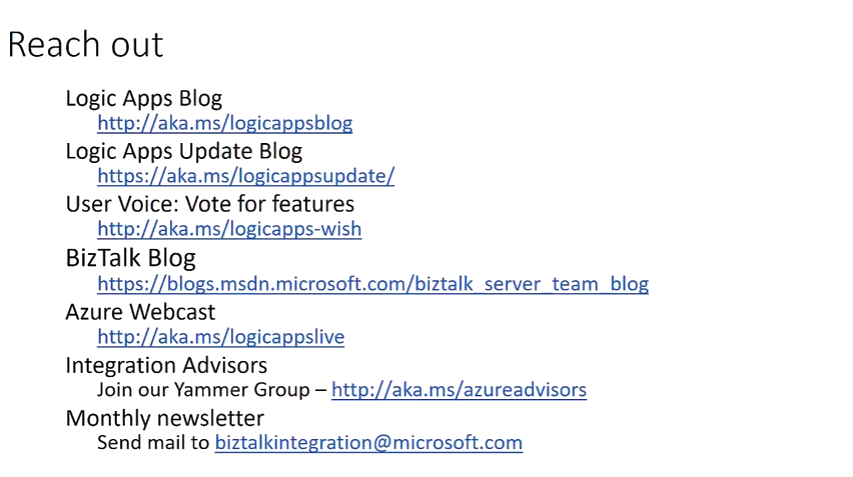 Usman Shaheen is a Partner in Allied Consultants and an Integration Consultant with more than 17 years of experience in a wide variety of scenarios such as custom .NET solution development, large enterprise integrations, designing and building API's and cloud solutions, SQL Server and PowerBI consulting with his domain knowledge in retail, utility, banking, healthcare and manufacturing.