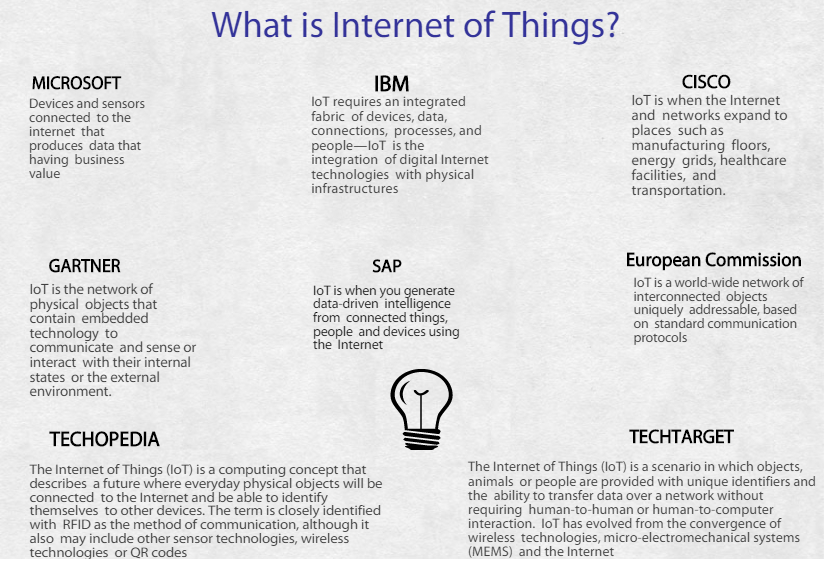 The above infographic summed-up the definitions of Internet of Things (IoT) by the leading industry firms that provide technology platforms, software and research services in the IoT ecosystem. The term has recently gained hype due to the commercial interest that IoT has generated. The term was initially coined by Kevin Ashton, co-founder and executive director of the Auto-ID Center at Massachusetts Institute of Technology (MIT). Auto-ID Labs actively pursue research on scalable IoT infrastructures.

It was in a presentation to Procter & Gamble (P&G) that Ashton introduced the concept of IoT. The concept of IoT was introduced in terms of the RFID (Radio Frequency Identification) tags and their integration to the internet (then a red-hot topic). The basic premise on which Ashton built the case for IoT was that an IT environment should not be dependent on humans to generate data. Instead, the computers should be able to collect data on their own by obtaining information directly from things (scanners, vehicles, refrigerators, industrial motors, buildings) thus presenting data in an analysis-ready form or events triggered on the basis of data gathered. Thus, the big theme behind Kevin Ahston’s thesis was to enable computers to sense, identify and understand their surroundings (using RFID and sensors) and off-set the limitation of human-entry of the data.

Instead of an internet of humans, the idea is to conceive and deliver an internet of everyday things. For an IoT solution, the main requirements are:

Businesses can perceive IoT as an enabling technology just as the internet proved to be an enabling factor and an engine of growth for commerce and communication in the late 90s. As the number of connected things increase (from home appliances and vehicles to industrial machines and energy grids), so does the complexity of IoT infrastructure.

Why businesses, especially B2B companies, need to explore the business benefits of IoT? There are three major reasons:

The ‘Internet of Things’ thing by Kevin Ashton.

The Internet of Things enables Digital Business by Gartner.

10 Reasons you need an IoT Strategy by Microsoft

Internet of Things: Instrumentation, Interconnection and Intelligence by IBM

[New Post] 5 Experts Reveal the Challenges and Opportunities in IoT

[Infographic] What are the 4 Basic Layers of an IoT Service Oriented Architecture?